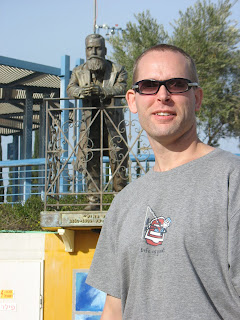 It has been an amazing 9 months so far, with 5–16 months to go of my sabbatical, spiritual pilgrimage and ministry trip. This is my second trip to Israel, with the first being for 10 days in December 2005/January 2006. Below is a summary of the happenings so far. (Click here to view my June 23, 2009 blog entry on my initial update from Israel.)

Sabbatical. It has been very relaxing to not have any deadlines to meet or a regular schedule to keep. It has been an exciting but sometimes hectic 18 years since my conversion to Christ (1992), with a rest now needed during this major transitional time of life. I am currently seeking the Lord for direction for my near and distant future (Proverbs 3:5-6).

Though a self-imposed and self-funded sabbatical, and in exchange for free room and board, I am working 40 hours per week as a volunteer receptionist at Christ Church Guest House in Jerusalem’s Old City. With only 23 guest rooms, my job is relatively easy compared to other jobs I have had in the tourism industry. From 1991–2001, I worked seasonally in the hotel-restaurant industry in 3 U.S. national parks (Glacier in Montana, Big Bend in Texas and Olympic in Washington State). Plus, the job is fun as I interact with guests from within Israel and around the world. The guest house is adjacent to Christ Church (built 1849), the oldest Protestant church (Anglican) in the Middle East. 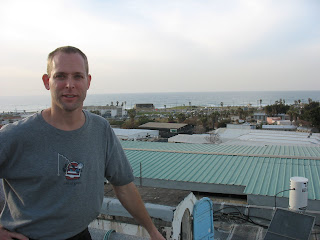 Pilgrimage. I have visited most all major Jewish (Old Testament) and Christian (New Testament) sites in Israel, and some sites in the West Bank/Palestine. Some Muslim sites have also been visited.

For 5 months, I had the unexpected luxury of an inexpensive use of a car (1992 Daihatsu Charade). With Israel being only the size of New Jersey, it does not take long to travel the entire country. Israel is a beautiful and geologically diverse country, with the Negev Desert, Galilee and Golan Heights rural areas being my favorite.

--> NOTE: For the original inspiration to make pilgrimage to The Holy Land, click here to read my August 29, 2009 blog entry about my reading of Halley's Bible Handbook in 1989 or 1990.

--> NOTE: Christianity Today magazine's April 2009 issue included a cover story on Christian pilgrimage. Two of the articles were "He Talked to Us on the Road: The surprising rewards of Christian travel" (for the online version, click here) and "Pilgrim's Regress: Classic places where Christians have gone for centuries" (click here).

Ministry. My home church is a Reformed Baptist church just outside the walls of the Old City. When time allows, I assist the British-Israeli pastor with substitute Bible study teaching, outreaches to the refugees in Tel Aviv and students at Hebrew University, and with baptism classes. In January, the pastor and I baptized a Hebrew University student who was on a study abroad semester with Massachusetts’ Smith College.

In May and October, I attended a university student conference for believers. Also, I have visited many Jewish- and Arab-background congregations throughout the land (Beersheba, Eilat, Haifa, Jerusalem, Kiryat Gat, Nazareth Illit, Tel Aviv). Moreover, twice a month I attend a young adult Bible study, and every month I attend a Jerusalem-based Men In Ministry gathering. 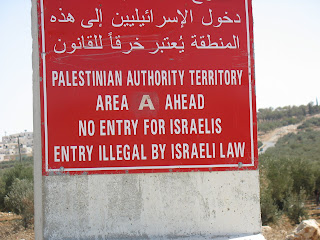 + in partnership with the Jewish National Fund, planting trees in a forest in the Judean Mountains near Jerusalem and the John F. Kennedy Memorial--click here to read my November 23, 2009 blog entry;

+ participating in the 7th annual International Day of Prayer for the Peace of Jerusalem--click here to read my October 1, 2009 blog entry;

+ experiencing some of the major Jewish feasts and holidays, including Hanukkah (Festival of Lights), Rosh Hashana (Jewish New Year), Shavuot (Pentecost), Succott (Feast of Tabernacles), Tisha B'av (Ninth of Av), Tu B'Shvat (New Year for the trees), Yom Kippur (Day of Atonement), and the weekly Shabbat from Friday sun down to Saturday sun down;

+ experiencing some of the major Muslim feasts and holidays, including Ramadan;

+ experiencing the major Christian celebrations of the liturgical Eastern and Western churches, including Pentecost, and Advent and Christmas;

+ visiting art, holocaust and Israeli cultural, military and political history museums (Israel has more museums per capita than any other country);

+ hiking in Israel’s beautiful national parks and nature reserves (purchased a one-year membership), 7 of which are UNESCO World Heritage sites and include the ancient Nabatean Incense and Spice Route;

+ viewing some of the movies offered during the 11th annual Jewish Film Festival (took place during the week of Hanukkah);

+ touring the Knesett, home of the Israeli parliament;

+ riding in the boat Faith with the Sea of Galilee Worship Boats;

+ making several trips to the West Bank/Palestine, including to Bethlehem Bible College and Mount Gerizim near Nablus;

+ enjoying the festivities of the 100th anniversary of the city of Tel Aviv and Israel's oldest kibbutz, Degania Alef;

+ and swimming in the Red Sea in Eilat, Israel's southernmost city and popular resort town on the border of Egypt and Jordan.

Germany. I am set to make my first-ever visit to Germany and continental Europe this month. Some Martin Luther (1483-1546) sites and meeting some distant relatives near Regensburg are on the itinerary. My beloved paternal grandmother was born in Kofering in 1905. When 17-years-old in 1922, Marie Gangl immigrated to the U.S. via Hamburg and New York City's Ellis Island. She died in 1992 in Connecticut.
Posted by Francis Kyle at 10:12 AM 1 comment: