Throughout 2011, churches, seminaries, universities, historical associations and Bible societies throughout the English-speaking world are commemorating the 400th anniversary of the completion of the King James Version (Authorized Version) Bible.

For instance, on November 16, 2011, England's Queen Elizabeth II and other members of the British royal family attended a commemorative event at Westminster Abbey in London. The event was sponsored by the King James Bible Trust.

On the King James Bible Trust's website is a wealth of information and videos about the history and influence of the KJV, including videos from Prince Charles and Queen Elizabeth II.

No other English translation has had more influence on American and British language and culture than the KJV. It is indeed the book that has changed the world, as this 5-minute video from the New Zealand Bible Society shows:

In 1982, the New King James Version (NJKV) Bible was published by the American publisher Thomas Nelson Inc. It took 7 years for the committee of 130 biblical scholars, pastors and theologians to complete the translation. As with the KJV, so the NKJV also used the Textus Receptus (Received or Majority Text) for its translation of the New Testament.

The American evangelist James Brainerd Taylor (1810-1829) made much use of his KJV Bible in his effort to be an "uncommon" Christian, defined by Taylor as "an eminently holy, self-denying, cross-bearing, Bible, everyday" Christian.

In God's providence, when James' brother Fitch W. Taylor (1803-1865) was in Canton (Guangzhou), China, serving as a chaplain on the first American naval ship to circumnavigate the globe (May 6, 1838–June 1840), Fitch was surprised to find his late brother’s "dear little book," his morocco-covered pocket KJV Bible.

The Bible was in the possession of the Yale-educated Dr. Peter Parker (1804–1888), the first Protestant medical missionary to China. The Bible was given to Parker by Fitch’s sister-in-law (the wife of brother Knowles Taylor) before Parker left New York City for China.

Fitch remembered seeing James “for hours, and daily, in absorbed and delightful study” with the “identical little volume” that Parker showed him. (As of this writing, the Bible has not been located yet by this biographer on J. B. Taylor.)

Below are some excerpts from my second book on Taylor entitled Of Intense Brightness: The Spirituality of Uncommon Christian James Brainerd Taylor (University Press of America, 2008), pages 10-13.

The excepts about J. B. Taylor's spirituality of biblicism are taken from the introductory essay to the 168-page work. 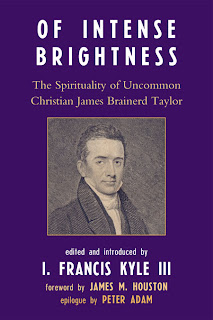 That this desire of Taylor’s was not merely an intellectual one is known from comments by one of his contemporaries:

With constancy he searched the Scriptures—not for subjects of speculation—not as a mere intellectual exercise—but with a strong desire to ascertain what affections ought to be cherished, and what duties performed.

In the Bible, as in a mirror, he looked at himself; and in light of the Bible he contemplated every object that claimed his attention or solicited his affections. He was indeed a Bible Christian. Perhaps no one ever more implicitly subjected his whole being to the inspired word.   (Memoir, page 428.)

In a “Note by a friend,” we learn more about this seemingly “walking concordance” from another of his contemporaries:

Mr. Taylor’s familiarity with the contents of the Bible was observable by all with whom he associated.

It was an interesting trait in his habits of intercourse with friends, that, when the conversation seemed at a stand, he would take out his little pocket Bible, saying, “I guess I can find something here to amuse us;” and then would give a familiar exposition of some passage, and connect with the illustration some anecdote; at the same time repeating, and turning to parallel passages; so that no one could listen to him without being deeply interested.

So peculiarly happy was he in these familiar illustrations, that it was not an unfrequent thing to see those around him smile with delight, and at the next moment weep with deep emotion. There are many, who were often in his society, who will recognize the truth of this remark in their own experience.

He would often speak of his Bible, as “the dear little book.”

I was present at his examination [for a license to preach the gospel, October 7–8, 1828, in East Haddam, Connecticut], and never heard any man quote the Sacred Scriptures with such fluency, for confirmation of his doctrinal views, as the questions were successively proposed to him.   (Memoir, page 43-44 footnote.) 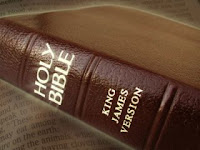 Indeed, the Princeton University and Yale Seminary-educated J. B. Taylor was, as John Wesley (1703–1791) claimed to be, homo unius libri (“a man of one book”).


And, like his deceased theological mentor Jonathan Edwards (1703-1758), Taylor was

Resolved, To study the Scriptures so steadily, constantly, and frequently, as that I may find, and plainly perceive, myself to grow in the knowledge of the same. (Resolution 28 of Edwards’ 70 Resolutions)

Due to Taylor's frequent usage of Scripture, some verses seemed to have been particularly treasured. These include (and are presented with the NKJV text):

● Deuteronomy 3:27: “Go up to the top of Pisgah, and lift your eyes toward the west, the north, the south, and the east; behold it with your eyes, for you shall not cross over this Jordan.”

● Ecclesiastes 9:10: “Whatever your hand finds to do, do it with all your might; for there is no work or device or knowledge or wisdom in the grave where you are going.”

● Daniel 12:3: “Those who are wise shall shine like the brightness of the firmament, and those who turn many to righteousness like the stars forever and ever.”

● 1 Peter 1:8: “Though now you do not see Him, yet believing, you rejoice with joy inexpressible and full of glory.”

Taylor hid the Word of God in his heart by memorizing Scripture so that he might not sin against God (Psalm 119:11).

Posted by Francis Kyle at 1:41 AM No comments: