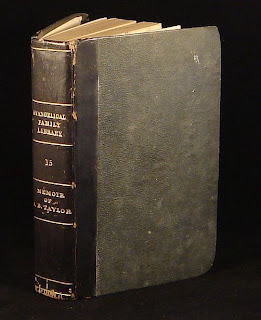 Via Google Books (est. 2004), digitalized copies of the two 1830's memoirs on James Brainerd Taylor are available online at no cost. They are fully searchable and downloadable.

--> The Memoir (first edition) was reviewed in the January 1834 issue of The Princeton Review (called then The Biblical Repertory and Princeton Review, Vol. 6, No. 1, Article III by Henry Axtell, pages 51-58) . . . was one of many theological journals that reviewed the popular memoir (can search via Google Books)

Search the global WorldCat.org database for a nearby library copy of
either memoir or the AbeBooks.com database to purchase a copy.