Here is a listening- and watching-worthy sermon jam, followed by the entirety of the same sermon.

The sermon is based on Luke 15 and its Parables of the Lost Sheep, Lost Coin and Prodigal Son.

The opening two verses of Luke 15 give the reason why the Lord Jesus presented these particular parables:


Now the tax collectors and sinners were all drawing near to hear him. And the Pharisees and the scribes grumbled, saying, 'This man receives sinners and eats with them.' So he told them [these parables].

Be blessed as this choice servant of God, uncommon Christian and former Bible college classmate of mine proclaims the truth as it is found in the compassionate, love-filled and non-discriminatory Lord Jesus Christ (Ephesians 4:21).


"The Value of Sinners, Prostitutes and Drunkards"
or "Great Worth of Worthless Men"
1 hour, 12 minutes

Granted Ministries--a literature, music, sermon and online ministry of Christ Fellowship in Hannibal, Missouri--describes the sermon and its Canadian-born and raised preacher this way:

This message was preached at the 2nd Annual Fellowship Conference (April 21-24, 2011) in Denton, Texas, by J. Ryan Fullerton, one of the elders (2002- ) at Immanuel Baptist Church in Louisville, Kentucky.

Those who have sat under Ryan's preaching know that he can expound Scripture to the satisfaction of scholars while at the same time driving the word authoritatively into the heart of those who hear. His messages rarely fail to transform the listener, and they never fail to arouse some kind of response.

This message is no different and accomplishes a great many things.

Mainly, Ryan urges us to consistently and diligently preach the gospel to the "prostitutes, tax collectors, and sinners" of our communities—and not in a distant and impersonal way, but in ways which bring us into close contact with their lives, even by inviting them into our houses.

Along the way, this sermon makes many other points.

It shows the graciousness of Christ, who practiced this kind of evangelism. It also confronts common misconceptions of holiness. It even corrects a misapplication of the biblical doctrine of sin, reminding us that even worthless sinners still have great worth before God.

As Christians, whenever we hear a preacher challenge us, we need to "search the Scriptures to see if these things be so" (Acts 17:11). It is our belief that God intends this message to work repentance into the hearts of many professing Christians lacking Christ-like love for sinners.

May you listen well, having asked God to open your heart to the word preached. 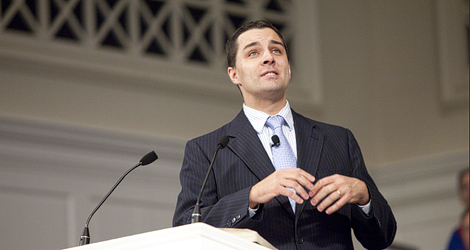 Among others available online via YouTube.com, IllBeHonest.com and other websites, here are some more messages by Pastor Ryan. Some are videos and some are audio only.

Be blessed as you are instructed and exhorted by this preacher of the Gospel.

+ "The Convicting Power of Grace," 4th annual Fellowship Conference, Denton, Texas, March 29, 2013 . . . "It is grace that spurs on radical obedience to reach lost areas around the world. It is not simply exhortations to be radical that result in people being radical. It is tender forms of kindness and grace that form the most radical discipleship in the world"

+ "Biblical Manhood & Womanhood," 8 messages including Q & A, delivered at Lake Road Chapel, Kirksville, Missouri, February 2012
--> Said one attendee and blogger: "I personally know of no finer introduction to manhood and womanhood from a Christian perspective"

+ "The Power of Example: How Not to Ruin a Perfectly Good Preaching Ministry" (1 Timothy 4:12), chapel message at Southern Baptist Theological Seminary, October 19, 2010

+ A message on balance given at a dorm meeting, Boyce College, February 1, 2010

Information on Ryan's biography and the church where he ministers are both online.

For a 10-minute personal reflection video about Ryan that was given during the commemorative service from one of his mentor-friends (and former Bible college classmate of Ryan and me), Pastor Clint Humfrey of Calgary, Alberta, Canada, click here.

Posted by Francis Kyle at 2:56 AM No comments: