Today marks the 20th anniversary of my baptism "in the name of the Father, and of the Son and of the Holy Spirit."

It was on Sunday, November 1, 1992, that Pastor Mike Chinn baptized me by water immersion during an evening service at Independent Bible Church (IBC, est. 1888) in Port Angeles, WA. A glorious and life-changing event it was!

Along with one of my heroes--the "uncommon Christian" James Brainerd Taylor (1801-1829)--so I also exclaim with utter amazement, wonder and joy,

I am indeed a wonder to myself when I think what I once was, and contrast my former with my present situation and prospects.

One church's Statement of Faith summarizes baptism like this:

We believe that baptism is an ordinance of the Lord by which those who have repented and come to faith express their union with Christ in His death and resurrection, by being immersed in water in the name of the Father and the Son and the Holy Spirit. It is a sign of belonging to the new people of God, the true Israel, and an emblem of burial and cleansing, signifying death to the old life of unbelief, and purification from the pollution of sin.

[1] What shall we say then? Are we to continue in sin that grace may abound? [2] By no means! How can we who died to sin still live in it? [3] Do you not know that all of us who have been baptized into Christ Jesus were baptized into his death? [4] We were buried therefore with him by baptism into death, in order that, just as Christ was raised from the dead by the glory of the Father, we too might walk in newness of life.

[5] For if we have been united with him in a death like his, we shall certainly be united with him in a resurrection like his. [6] We know that our old self was crucified with him in order that the body of sin might be brought to nothing, so that we would no longer be enslaved to sin. [7] For one who has died has been set free from sin. [8] Now if we have died with Christ, we believe that we will also live with him. [9] We know that Christ, being raised from the dead, will never die again; death no longer has dominion over him. [10] For the death he died he died to sin, once for all, but the life he lives he lives to God. [11] So you also must consider yourselves dead to sin and alive to God in Christ Jesus.

[12] Let not sin therefore reign in your mortal body, to make you obey its passions. [13] Do not present your members to sin as instruments for unrighteousness, but present yourselves to God as those who have been brought from death to life, and your members to God as instruments for righteousness. [14] For sin will have no dominion over you, since you are not under law but under grace.


It was a long and spiritually dark 21.5 years that led up to the baptism and surrender/conversion to the Lord Jesus Christ just 1-2 weeks prior in mid-October 1992.

An employee dorm room at historic Lake Crescent Lodge in Washington State's Olympic National Park was the location the Sovereign God chose whereby I would be "born again"/spiritually regenerated (John 3:3, 7; 1 Peter 1:3, 23), repent of my sins and place my faith/trust in the Lord Jesus Christ.

At the time, I was a seasonal waiter nearing completion of the first of what would be 9 seasons (1992-97, 1999-2001). Only those bosses, co-workers and returning guests who knew me that first season of employment could truly contrast the "before and after" Francis. 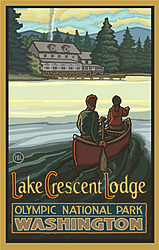 I had grown up in a nominal Roman Catholic home in West Hartford, Connecticut, and was thus some 3,000 miles away from familiar territory at the time of my conversion to biblical Christianity (Evangelical Protestantism) and subsequent baptism.

From leaving Roman Catholicism in October 1989, to reading the Bible cover-to-cover in Connecticut and while traveling/working in 3 western U.S. national park hotel-restaurants (Glacier in Montana, Big Bend in Texas, Olympic in Washington State), to losing a Jewish girlfriend due to a break-up, to attending a "college-and-career" young adult Bible study in the home of an Independent Bible Church elder and his wife (Todd and Noni Huber in Port Angeles), to meeting one-on-one with Pastor Mike Chinn who explained the Gospel to me--the Lord used various Christians and circumstances to bring me to a saving knowledge of Himself.

I am looking forward with eager anticipation and expectation to what my 5th decade of living (began last year/2011)--and now 3rd decade of Christian living--will consist of.

Your eyes saw my unformed substance; in your book were written, every one of them, the days that were formed for me, when as yet there was none of them.  Psalm 139:16

NONE but Christ; ALL for Christ.  James Brainerd Taylor

Lastly, an instructive sermon on believers baptism is this message from a California pastor who was instrumental in my early spiritual growth as a believer. Be blessed!