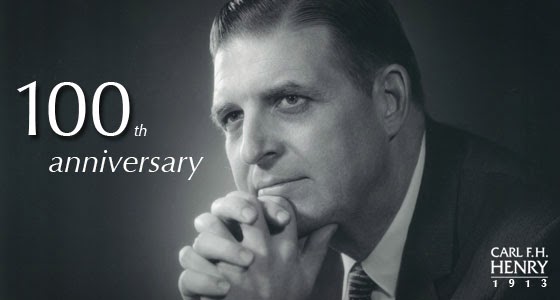 "If we see Billy Graham as the great public face and generous spirit of the evangelical movement, Carl F. H. Henry was the brains." So wrote David Neff, the editor of Christianity Today, an American national magazine founded by Graham and Henry in 1956.

The year 2013 marks the 100th anniversary of the birth of one of the most important 20th-century theologians and leaders within Protestant Evangelicalism. Dr. Henry was born on January 22, 1913, to German immigrants who settled on Long Island in New York.

In honor of the anniversary, I had the privilege of attending the one-day conference, "Carl F. H. Henry: A Centennial Celebration" on September 26, 2013.

With about 100 in attendance, including some relatives of the late Dr. Henry, the conference took place at the Southern Baptist Theological Seminary. (To my delight, SBTS is located just four miles from my new home and ministry base [June 2013- ] in Louisville, Kentucky-- Immanuel Baptist Church.)

To watch the 32-minute panel discussion, with Dr. Mohler as the moderator, see here.

Among the highlights from the "theologian's play day" (so Dr. Mohler, SBTS President) was a free photocopy for conference attendees of the first-ever issue of Christianity Today (vol. 1, no. 1, October 15, 1956). From 1956-68, Dr. Henry served as the magazine's founding editor.

Also, the lecture from the new president (2013) of The King's College (Manhattan, New York City) and author of Recovering Classic Evangelicalism: Applying the Wisdom and Vision of Carl F. H. Henry (Crossway, 2013), Greg Alan Thornbury, was a real treat. Dr. Thornbury is the son of John F. Thornbury, a longtime pastor (1965-2009) of Winfield Baptist Church in central Pennsylvania.

For an introduction to Carl F. H. Henry, here are 7 online resources that UCM hopes will prove helpful.