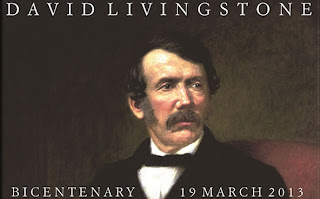 “I have found that I have no unusual endowments of intellect, but I this day resolved that I would be an
uncommon Christian.”


So wrote a young David Livingstone (1813–1873) prior to his initial departure for Africa.

Though not widely known today, the inspiration behind Livingstone’s resolution is James Brainerd Taylor (1801–1829). The Princeton University and Yale Seminary-educated evangelist in the Second Great Awakening was a household name in mid-19th-century America and Great Britain.

As learned from the Memoir of James Brainerd Taylor (1833), Taylor defined an "uncommon Christian" as one who is an “eminently holy, self-denying, cross-bearing, Bible, everyday” Christian.

Probably the most widely known person who was influenced and inspired by Taylor’s Uncommon Christianity was Livingstone.

Presumably in a diary entry, the famed Scottish pioneer missionary-explorer to Africa wrote (and as quoted above),


I have found that I have no unusual endowments of intellect, but I this day resolved that I would be an uncommon Christian.

Elsewhere, in a May 5, 1839, letter to his younger sister Janet, it is clearly known that Livingstone read and was influenced by the Memoir of James Brainerd Taylor.

At the time of writing, the memoir’s popularity was at its peak in the U.S. and U.K. (a London edition appeared in 1834 by the publisher Westley and David), and the 26-year-old Livingstone was 19 months shy of leaving for Africa.

In the letter—which is housed at the National Library of Scotland’s John Murray Archive in Edinburgh—Livingstone makes reference to “Mr. J. B. Taylor” and “uncommon Christians” (with “uncommon” underlined for emphasis). He then cites the American evangelist almost verbatim.

At the time, the London Missionary Society (est. 1795) candidate Livingstone was studying theology under a pastor in Ongar, England. And his sister was a teacher in their native Blantyre, Scotland.

Livingstone quotes from a May 11, 1823, letter that Taylor wrote while a student at New Jersey’s Lawrenceville Academy.

Quoting the entire section for the sake of context, Livingstone states to his “dear sister,”

This is true not only with respect to the things of this world, but also in reference to that, the possession of which is of far more consequence then all the other good things in the whole universe: the attainment of holiness, eminent holiness. We have the highest inducement to diligence in seeking this.

“They who hunger and thirst after righteousness shall be filled.” [Matthew 5:6.]

Let us ask perseveringly, earnestly, and with a determination never to rest content till we have attained, what Mr. J. B. Taylor used to term, the state of being uncommon Christians, that is, “eminently holy and devoted servants of the Most High" [James Brainerd Taylor, quotation marks not in the original].

Let us seek—and with the conviction that we cannot do without it—“that all selfishness be extirpated, pride banished, unbelief vanish[ed] from the mind, every idol dethroned, and everything hostile to holiness and opposed to the divine will crucified; that ‘holiness to the Lord’ may be engraved on the heart [Exodus 28:36, 39:30], and evermore characterize our whole conduct” [James Brainerd Taylor, quotation marks not in the original]. This is what we ought to strive after; this is the way to be happy; this is what our Savior loves: entire surrender of the heart.

May He enable us by His Spirit to persevere till we attain it. All comes from Him, the disposition to ask as much as the blessing itself. “Every good gift,” every grace “comes from the Father of lights” [James 1:17]. Let us bless him if he has given any desire after him and his Savior, and take it as a pledge of better things to come.

We must not rest satisfied with desires, never draw any comfort from our feelings. But only be content with the blessings themselves when conscious of resting on the Lord Jesus. Never look within but constantly away from ourselves to the blessed cure for our maladies, which is ever open and always free.

In one of the first exhaustive biographies on Livingstone, William Garden Blaikie quotes from a portion (approximately one-fifth) of the above May 5, 1839, letter by Livingstone. With a massive amount of Livingstone manuscripts at his disposal, the professor at New College, Edinburgh, no doubt had to be selective regarding what to include, and what not to include, in his 500-plus page volume.

And because Livingstone himself does not use quotation marks, the Scottish biographer is understandably unaware that Livingstone is actually citing “Mr. J. B. Taylor” in the section of the 1839 letter that he does include. Blaikie (1820-1899) simply writes, “Alluding to the remark of a friend that they should seek to be ‘uncommon Christians, that is, eminently holy and devoted servants of the Most High. . .’” (page 46).

The impression is given that the anonymous friend is a contemporary of Livingstone, possibly a friend (perhaps good friend D. G. Watt), fellow ministerial apprentice, or even his pastor-mentor, the Rev. Richard Cecil. And that the section “all selfishness be extirpated, pride banished, unbelief vanish[ed] from the mind, every idol dethroned,” etc., and expansion of what it means to be an “uncommon Christian” (“eminently holy and devoted servants of the Most High”), are Livingstone’s own words and not those of his anonymous “friend.”

Here are 4 major online resources and events in honor of the 200th anniversary of David Livingstone's birth:

+ Westminster Abbey Bicentenary Commemoration
London, England
March 19, 2013 (6:30 p.m.)
--> The ceremony is being attended by Livingstone and Moffat family members, church bodies, medical professionals, government officials, MPs and MSPs and many others with a deep regard for Livingstone and his legacy  . . . Livingstone's wife Mary (1821-1862) was the daughter of Robert and Mary Moffat, Scottish missionaries to Africa
--> Livingstone's grave and inscription

--> "Celebrating David Livingstone, 'Africa's first freedom fighter': Born to mill-workers living in a single room in Blantyre near Glasgow 200 years ago, David Livingstone's life and legacy as an explorer and humanitarian is being celebrated across the UK and Africa," "The Scotland Blog," The Guardian (U.K.), March 19, 2013


Bicentennial Events in USA
(for Canada, scroll to very end)

While American commemorative events are understandably yet sadly few, Uncommon Christian Ministries (est. 2007) is presenting a paper/lecture at the following academic conferences and church. For a copy of the paper, contact UCM.

In Honor of the Bicentennial of Livingstone’s Birth (March 19, 2013)

Maybe see some of you in Marysville, Tacoma or Portland? Come and bless us with your presence!

Also, for a map created by Uncommon Christian Ministries entitled "The Global and Cross-Cultural Impact of the American Evangelist James Brainerd Taylor (1801–1829) and His Two Memoirs (1833, 1838)," see here. 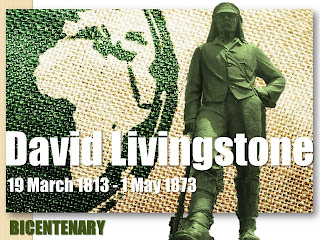 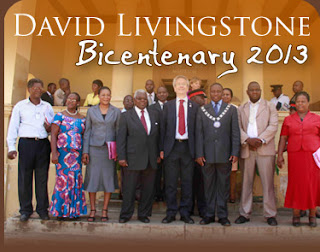 David Livingstone, a Waterloo resident and great-great-grandson of John Livingstone (1811-1899, older brother to the famed David Livingstone), donated artifacts to the exhibit, as did the Museum of Health Care Kingston, Stratford-Perth Archives and Waterloo Region Museum.

Of this lone Canadian exhibit, see: