While attending the “Carl F. H. Henry: A Centennial Celebration” at Southern Baptist Theological Seminary in Louisville, Kentucky, in September 2013, I was reminded of my first learning about the evangelical stalwart from William"Bill" Fulton Kerr.

As Henry (1913–2003) was departing Northern Baptist Theological Seminary in 1947 in order to help form Fuller Theological Seminary in Pasadena, California, my new friend and mentor, Dr. Kerr (1915–2003), informed me—nearly a half-century later, at age 78 (and me a one-year-old Christian convert of 22 years of age) in 1993 in Port Angeles, Washington—that he was arriving at the Lombard, Illinois, campus in order to serve as the school’s new Associate Professor of Old Testament (but later changed to Professor of Theology). 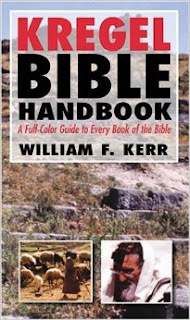 That spring (1947), Kerr had just graduated with his Doctor of Theology degree from Northern Seminary. During his doctoral studies, he served as the seminary’s instructor in history and Old Testament (1944–47). Before the Old Testament teaching post was assumed, however, Northern Seminary instead appointed Kerr as Professor of Theology, thereby filling the post left vacant by the California-bound Henry.


With the centennial anniversary of Kerr’s birth in 2015 (September 6), a tribute to the beloved pastor-professor-author seemed in order. So I researched, wrote and delivered a paper/lecture on Dr. Kerr at the annual southeast regional meeting of the Evangelical Theological Society. Columbia International University in Columbia, South Carolina, served as host to the March 18-19, 2016, meeting. Dr. Kerr was a member of ETS, as well as the American Academy of Religion and the Society of Biblical Literature.

For a copy of the paper entitled "In the Shadow of Carl F. H. Henry: The Life and Ministry of William F. Kerr," please contact Uncommon Christian Ministries.

"Tail of the Dragon"

While on the same, 12-day, 1,900-mile road trip to the American Southeast (Lebanon, TN; Asheville and Cherokee, NC; and Charleston, Columbia and Coosawhatchie, SC), I was able to finally ride the "Tail of the Dragon" on March 12, 2016. On my 2004 Suzuki V-Strom DL650 (a middleweight sport touring bike that I've owned since 2007), this was my first and long-awaited motorcycle trip to this historic and scenic region of the country.

With 318 curves in 11 miles on the North Carolina/Tennessee border--and situated along the borders of the Great Smoky Mountains National Park and Cherokee National Forest--this short stretch of the 582-mile U.S. Route 129 is popular with motorcycle and sports car enthusiasts. The Dragon has no cross roads, no driveways and trucks are banned. Sadly, and mostly due to rider/driver error, deaths occur on The Dragon--see stats here.

For a 27-minute "Tennessee Life" (production of the PBS-TV station in East Tennessee) feature story on The Tail of the Dragon that aired in May 2015 (episode 14), see here.

Deals Gap, North Carolina, the tiny community that lies at the mountain pass (2000' elevation) along the North Carolina/Tennessee border, is a must visit when beginning or ending one's ride on The Dragon. 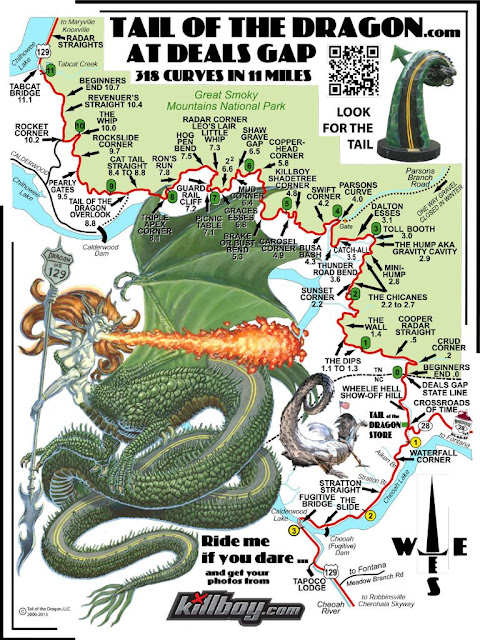 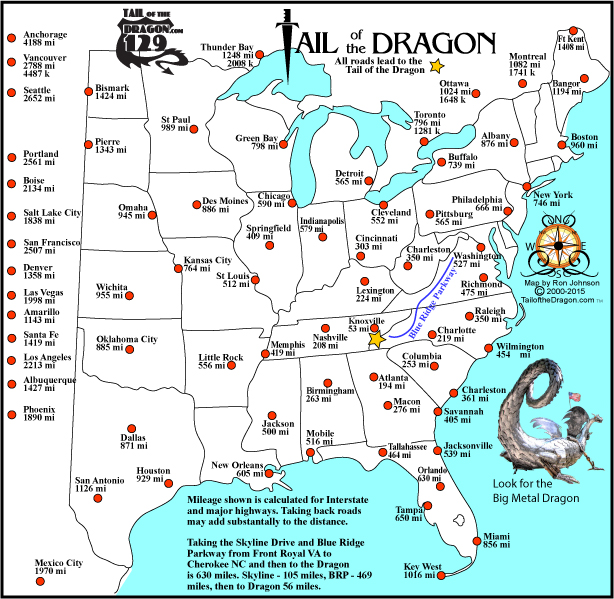 Posted by Francis Kyle at 6:05 PM No comments:

With the theme this year being "Set Apart To Do Holy Business for Our King," the 6th annual Embracing the Truth Bible Conference (ETT) takes place March 8-11 in the Gladeville community of Lebanon, Tennessee (25 miles east of Nashville). I will be attending the last two days of the conference as a first-time attendee.

Click here to view the conference flyer; here for ETT's schedule; and here for the ETT welcome letter.

[Post-conference update: to listen to the messages, see here.]

The conference's vision is "to help men as leaders 'to guard what has been entrusted to you' (2 Timothy 1:14) and to 'be strong in the grace that is Christ Jesus' (2 Timothy 2:1) and 'to share in the suffering, like a good soldier of Jesus Christ'" (2 Timothy 2:3).

Though primarily for men and especially for pastors/church elders, women also are welcome to attend ETT and be instructed and blessed. However, there exists an ETT-like annual spring conference solely for women. This year (2016), the Women of Grace Bible Conference is at the Holiday Inn (World's Fair Park location) in downtown Knoxville, Tennessee, April 21-23. This year's theme is "Christian Women Growing in Grace."

After the opening lecture and sermon on the evening of March 8, the daily format for March 9-11 (Wednesday-Friday) is to have one lecture (10:30 a.m.) sandwiched between two sermons (9:15 and 11:45 a.m.) in the morning, fellowship and lunch provided by the host church (1:00 p.m.), the afternoons free for rest or recreation, and then one lecture (6:15 p.m.) and one sermon (7:15 p.m.) in the evening. So it's like going to a multi-day music festival, but instead of music, the people are gathered to hear the Bible taught (lecture) and preached (sermon).

Once again, Hamilton Chapel Church is hosting ETT. The historic Lebanon, Tennessee, church was founded by newly freed slaves just after America's 4-year Civil War had ended in 1865. Hamilton's pastor (1992- ), Dr. Robert L. Spickard, Sr., "has led the congregation in tremendous spiritual growth over his fifteen year tenure at this church. He teaches about the election of grace, justification, salvation, and sanctification. He preaches about the sovereign grace of Jesus Christ. Under his leadership, he has taught us that we serve a sovereign God, eternal, and still on the throne."

In the African-American church tradition, the conference presider is Wayne Cornelius, the senior assistant pastor at Main Street Baptist Church in Lexington, Kentucky.

As always, ETT conference registration is free. But the conference organizers ask that attendees complete a simple registration form. "The cost will not be a burden to those who attend, but believe those who receive this wholesome manna will support us in seed to continue these efforts to share the  gospel." A morning and evening freewill offering will be taken each day.

If in the Nashville area March 8-11, consider this as your invite to attend and be instructed and blessed by ETT's "wholesome manna" from God's Word, preached by God's choice servants who are some of the boldest preachers I know. "The wicked flee when no one pursues, but the righteous are bold as a lion" (Proverbs 28:1).

The African-American Calvinistic Baptist ETT conference is the annual spring conference of the annual summer Sovereign Grace Bible Conference founded by the late D. J. Ward (died 2008) over 30 years ago (1985- ).

Prior to its current host church (2010- ) of New Home Missionary Baptist Church in Chattanooga, Tennessee, the SGBC was held where Elder/Pastor Ward served (1989-2008), namely, at Main Street Baptist Church (est. 1862 during the Civil War) in Lexington, Kentucky. The historic church is part of Lexington's African-American Heritage Trail.

All 11 ETT preachers were influenced by Elder D. J. Ward, either by Elder Ward's pastoral mentoring (thus, are a spiritual "son in the ministry" in the African-American church tradition) or by Elder Ward's sermons. For a brief biography on Elder Ward, see here.

Through my good friend Daniel R. Green (1947-2006), I first learned of Elder Ward relatively soon after my conversion to the Christian faith (Evangelical Protestant) in 1992 and while living in Port Angeles, Washington. I then first met and heard Elder Ward preach at a John G. Reisinger-founded John Bunyan Conference in Pennsylvania in 1996. I met and heard him preach again when I attended the 2003 and 2004 Sovereign Grace Bible Conference in Lexington, Kentucky. As with many others, so also did Elder D. J. Ward make a lasting impression on my life and ministry, especially as it relates to preaching and pastoring. (Read here for a April 24, 2016, tribute to Elder Ward in the Lexington Herald-Leader.)

The ETT preacher from Greensboro, North Carolina, is one of my favorites. A close friend of Elder Ward and blessed with a sharp mind and pastor's heart, he is one of the boldest and bravest preachers I know. David B. Morris studied classics and linguistics at the University of North Carolina at Chapel Hill. He became a Christian in 1973. After nearly twenty years of pastoral ministry, he entered an itinerant ministry of evangelism and conference speaking. He and Terri, his wife of 31 years, have six children. Click here to listen to some of Elder Morris' sermons.

Another favorite "Sovereign Grace" preacher of mine who will be at ETT is Jim McClarty, the founding pastor (2001- ) of Grace Christian Assembly in Smyrna, Tennessee. (Not that it matters, but both Pastor Morris and Pastor McClarty are Caucasian men loved by the "Sovereign Grace" African-American churches that are primarily located in the American South.)

Posted by Francis Kyle at 1:35 AM No comments: