Since June 2009, I have served as a volunteer at Christ Church Guest House in Jerusalem's Old City. I will remain here until this summer.

Christ Church is the oldest Protestant church in the Middle East. Built in 1849, the church was founded by the Church's Ministry among the Jewish People (est. 1809, formerly called the London Society for Promoting Christianity amongst the Jews). With founders such as British church leaders William Wilberforce (1759-1833) and Charles Simeon (1759-1836), CMJ remains today an Anglican (Church of England) missionary society in the Evangelical Protestant tradition. Christ Church is a member of the Fellowship of Confessing Anglicans (est. June 2008). 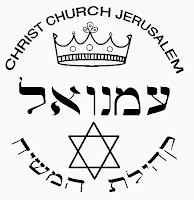 The world of CMJ was shocked to learn of the December 18, 2010, murder of one of its newest staff members. Kristine Luken was stabbed to death by two Muslim terrorists from the West Bank/Palestinian territories while hiking with a friend in the Jerusalem Forest southwest of the city.

A 44-year-old American Christian with a love for the Jewish people and Israel, Kristine worked for CMJ's U.K. office since 2009. I had met her briefly when she visited Jerusalem's Christ Church a year ago (winter 2009-10). A graduate of Virginia's George Mason University (Class of 1988), the non-Jewish/Gentile uncommon Christian Kristine had resigned from her comfortable 15-year federal government job in Washington, D.C., in order to serve the Lord in full-time vocational ministry, first at Patrick Henry College in Virginia, then with CMJ U.K. Click here to read her obituary.


The brutal and senseless murder made front-page news in the Israeli media (see below links), as well as international headlines. A month after the murder, the Israeli police announced 13 arrests. The 13 Muslim men were members of a Palestinian terrorist group that formed in 2009. Miraculously, Kristine's hiking companion, the 46-year-old British-born Israeli Kay Wilson, survived the attack of 12 stab wounds, helped police in locating the attackers, and lived to tell about it (see below links to her interviews). Kay is the main educator/tour guide for CMJ Israel's Shoresh Study Tours.

Please join me in praying that the Luken family be comforted by the Divine Comforter during their time of loss, and that the Lord will be glorified in this tragic death (John 11:4). Also, consider giving to the Kristine Luken Memorial Fund via CMJ's U.K., U.S. or Israel office. Pray for Kay Wilson, too, as she heals both physically and psychologically.

+ Last message of American stabbed to death hiking in Israel : "Remember to search out the goodness of God in the face of tragedy"
Daily Mail (U.K.), December 21, 2010