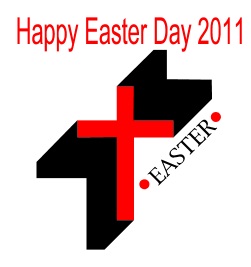 This Easter/Resurrection Sunday, I will be attending the sunrise worship service at Jerusalem's Garden Tomb.

In addition to the 4th-century Church of the Holy Sepulchre within the walled Old City of Jerusalem, The Garden Tomb is a possible (though less likely) location of the burial and resurrection of the Lord Jesus Christ. Both locations claim to be adjacent to Calvary/Golgotha where Christ was crucified.

An oasis of calmness in the midst of a tension-filled and Muslim-dominated East Jerusalem, The Garden Tomb is popular with Evangelical Protestant pilgrims visiting The Holy Land.

Uncommon Christian Ministries wishes you a blessed and Christ-focused Easter 2011. "None but Christ ~ All for Christ" (UCM's motto).

The Lord Jesus Christ, "declared to be the Son of God with power according to the Spirit of holiness, by the resurrection from the dead" (Romans 1:4).

UPDATE:
Here is the video of the 1 hour, 15 minute worship service, recorded and broadcasted live by CBN.com on April 24, 2011:

Posted by Francis Kyle at 5:10 PM No comments: 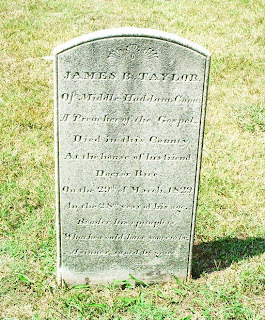 In honor of the 210th anniversary of the birth of James Brainerd Taylor (born April 15, 1801), Uncommon Christian Ministries is pleased to announce that a photo of J. B. Taylor's gravestone has been online since September 8, 2008.

Reader, his epitaph is,
what he would have yours to be.
A sinner saved by grace.


There also exists an obelisk (memorial monument/stone) to J. B. Taylor in the Taylor Family burial plot at Union Hill Cemetery in rural Middle Haddam, Connecticut.

Ten years ago, on April 15, 2001, it was fitting that the bicentennial anniversary of J. B. Taylor's birth fell on Easter/Resurrection Sunday. Though once well known among mid-to-late 19th-century American and European Christians, it is nice to see the American evangelist's "uncommon Christian" life and ministry being resurrected in the early 21st century via books and the Internet, including the free online (Google Books) editions of the two memoirs published on him in the 1830's.

The review is by Dr. Leslie P. Fairfield, Professor Emeritus of Church History, Trinity School of Ministry: An Evangelical Anglican Seminary (est. 1975), Ambridge, Pennsylvania. In it, Prof. Fairfield states in his closing paragraph, 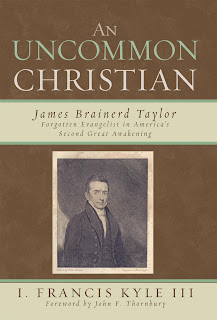 Francis Kyle has written a thorough, careful, balanced biography of this evangelical saint, so influential in mid-19th century America and so little known today. Based on exhaustive research in the relevant sources, this book offers a grass-roots view of New England revivalism in the 1820's, as the foundations of the antebellum "Evangelical Empire" were being laid. Readers interested in early New England and undergraduate studies of American religion should find this work accessible, interesting and useful. 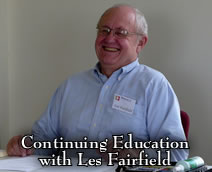 Regarding the review's author, the first-ever issue of Trinity Journal for Theology and Ministry (Fall 2007, Vol. 1) was devoted to "Anglicanism, Past and Future: Studies in Honor of the Rev. Dr. Leslie P. Fairfield." Prof. Fairfield (B.A., Princeton; Ph.D., Harvard) is the author of John Bale [1495-1563]: Mythmaker for the English Reformation (2006) and--among other online and print articles--"The Trinity and Postmodern Evangelism" (The Anglican Quarterly, Fall 2010).

May today's church, seminary and university be instructed and challenged upon learning about the Princeton University and Yale Seminary-trained Taylor and his advocacy for uncommon Christianity--"eminently holy, self-denying, cross-bearing, Bible, everyday" Christianity.
Posted by Francis Kyle at 6:31 PM No comments: